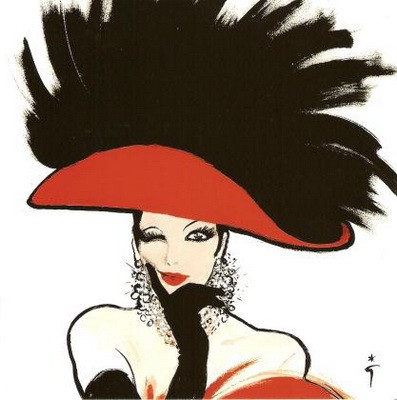 René Gruau (4 February 1909 – 31 March 2004) was a renowned fashion illustrator whose exaggerated portrayal of fashion design through painting has had a lasting effect on the fashion industry . Because of Gruau’s inherent skills and creativity, contributed to a change in the entire fashion industry through the new pictures that represented the already popular designs created by designers in the industry. The benefits, including economic stimulation and enhancement of advertising are still vividly presented in the industry today via a new way of fashion illustration, fashion photography. Gruau became one of the best known and favorite artists of the haute couture world during the 1940s and 50s working with Femina, Marie-Claire, L’Officiel, L’Album Du Figaro and an assortment of “high-style” magazines. Gruau’s artwork is recognized and commended internationally in some of Paris and Italy’s most prestigious art museums including the Louvre in Paris and the blank in Italy. in addition to his international fame and recognition, “Gruau’s artwork is known for its timeless and enduring style”.