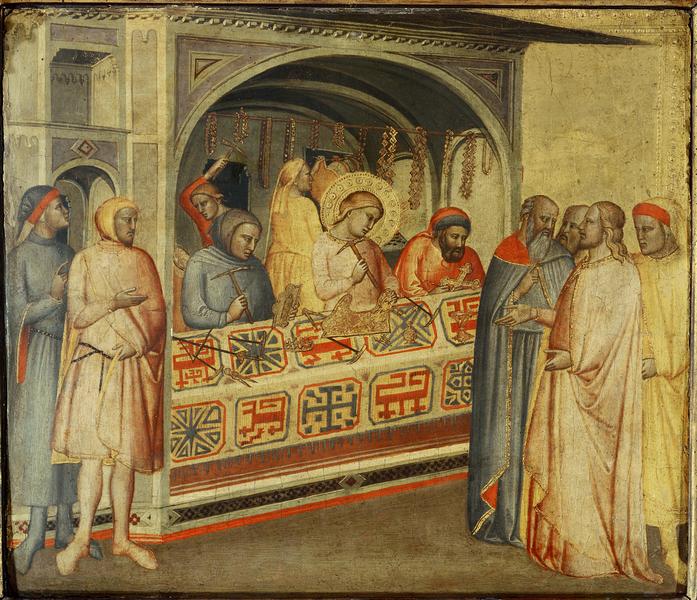 He was the son of Gaddo di Zanobi, called Gaddo Gaddi. He was a member of Giotto’s workshop from 1313 to 1337, when his master died. According to Giorgio Vasari, he was considered Giotto’s most talented pupil: in 1347 he was placed at the top in a list of Florence’s most renowned painters.

His main work is the cycle of Stories of the Virgin in the Baroncelli Chapel of the Basilica of Santa Croce in Florence (1328–1338). Later he perhaps painted the cabinet tiles in the sacristy of the same church, now divided among the Galleria dell’Accademia of Florence and museums in Munich and Berlin. These works show his mastership of Giotto’s new style, to which he added a personal experimentation in the architectural backgrounds, such as in the staircase of the Presentation of the Virgin in the Baroncelli Chapel.

According to some scholars, he collaborated in the Stefaneschi Polyptych in Rome. His other works include a Madonna in Bern, an Adoration of the Magi in Dijon, the Stories of Job (Pisa, Camposanto Monumentale), the Madonna Enthroned with Child, Angels and Saints (Florence, Uffizi Gallery), The Stigmatization of Saint Francis (Cambridge, MA, Harvard Art Museums), the Madonna del Parto (Florence), and the Polyptych in Santa Felicita’s sacristy, Florence. Vasari credited him also of the design and reconstruction of the Ponte Vecchio, which is however disputed by modern scholars.